What is the most popular thing to add to meats cooked outdoors? 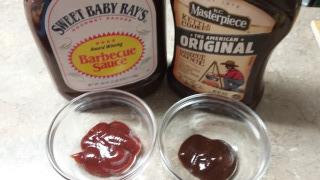 It’s true, the most popular thing to add to the plethora of meats cooked outdoors is BBQ sauce. If you had guessed ketchup, believe it or not, you would be wrong.

The person who invented BBQ sauce is unknown, but whoever he was, he was a genius! References to the sauce started appearing in 17th century English and French literature about the formation of the American colonies. The rest is history and boy has BBQ sauce been kicked up a notch with all kinds of flavors and varieties created over the last 400+ years!

A traditional flavoring for pork, beef and chicken, sauce can range from watery to thick, from being heavy on the vinegar to being loaded with spice. Ranging in flavor from sugary to savory, to HOT!, heck, there’s even mustard and mayonnaise based BBQ sauces. It’s a regional thing, there’s Carolina BBQ; Tennessee whiskey BBQ; Texas BBQ; and the favorite of many, Kansas City Style BBQ.

Kansas City BBQ Style: This is a thick, rich tomato based sauce that’s got some spice but is heavier on the sweet. Tomato, brown sugar and vinegar are the base ingredients. It really doesn’t penetrate the meat and is more like a frosting than a marinade. It glazes real nice though when put on the meat about 10 minutes before pulling off the grill, a beautiful finish. This is the most popular style of BBQ sauce in the U.S. and what you see the most of in the bottled varieties on the grocery store shelf. Be careful with the store bought stuff though! The high sugar content of the ‘ready’ varieties tend to burn real quick so keep an eye on your dinner.

Texas BBQ Style: This has more kick than Kansas City style. It has less tomato, less sugar and a lot more spice such as cumin, black pepper, chili pepper and even chili powder. Meat drippings and hot sauce - Tabasco - are always part of this style and fresh veggies like green bell pepper and onion are often added.

East Carolina Mop: This simple but tasty sauce was pioneered by the African slaves of Scottish settlers in the region. It’s a straight forward combination of hot pepper flakes, ground black pepper and vinegar. The reason it’s called a mop is because this thin concoction is literally mopped - basted - on the meat throughout the cooking process, the flavor really penetrates! With little if any sugar and no tomato in this style, East Carolina Mop is a sharp contrast to other sauces.

Western Carolina Dip: From the hilly areas of North Carolina, most American sauces can trace their roots to this one. The recipe usually consists of a base of black pepper blended with tomato paste or tomato sauce, or ketchup, with vinegar added to balance it out. Like the East Carolina Mop, this is a thin sauce that is mopped on the meat throughout the cooking process.

South Carolina Mustard Style: This is a whole new BBQ sauce experience. Early German settlers developed this one and while good on chicken, it’s tailor made for pork. A little thicker than its Carolina cousin sauces, a simple recipe consists of mustard, vinegar, spices and a little sugar. It’s fantastic on a pulled pork sandwich topped with coleslaw!

Tennessee Whiskey Style: Made famous by the Jack Daniel’s World Championship Barbecue Invitational, this method of flavoring meats is also referred to as ‘Memphis Style’ has become so popular it now deserves its own category. This combination of vinegar, whiskey, molasses, spices, and Worcestershire sauce gives BBQ a whole new flavor profile.

There are all kinds of variations and morphing of styles out there, there are probably all kinds of choices available at your favorite grocery store.

In this bbq sauce challenge, I focused on trying the 'base' or original varieties of all brands when possible.   So after all this sampling and making comparisons, which store-bought sauce do I think is the cream of the crop?  Is it KC Masterpiece?  Sweet Baby Ray's?  Stubbs?  Something else?

Keep in mind after all this sampling, the best bbq sauce is made from scratch, but there are going to be those times when you don't have time to make any.  Having a store-bought variety you like on hand is a good thing for those impromptu bbq cravings, a way to doctor a burger up and/or "Plan B"/leftover offerings.  I hope this list helps you in your store-bought bbq sauce shopping!

The Worst - Stubbs:  This is THE worst bbq sauce I've ever put in my mouth.  I really can't put this in any bbq category either except BAD.   There's not enough kick in it to be a Texas Style, there's not enough sweet for it to be a called a KC style and the sauce comes up short on enough vinegar to be considered a Carolina style.  I don't care if Stubbs comes from Texas, this sauce sucks and is NOT a repeat buy.  You can't even doctor this stuff up it's that bad.

KC Masterpiece:  This sauce is almost the literal definition for a KC BBQ style sauce, it's thick, big on the tomato and heavy on molasses, but so heavy in fact, the sweet from the molasses is overpowering.  This sauce by itself is too sweet, it needs to be doctored before putting it on anything.  Tastes change going from childhood (liking the sweet) to adulthood and when it's all said and done, KC Masterpiece is what I would politely call an introductory BBQ sauce.

Heinz Classic:  The commentary on the bottle boasts of how the Heinz Barbecue team traveled the country and talked with pitmasters to bring us a sauce that captures the real flavors of barbecue.  Did they only talk to the losing teams then?  Because this sauce sucks.  It's a KC BBQ style sauce that is just too heavy on the sweet.  The first ingredient listed on the label is cane sugar, I'll give them kudos for using a natural ingredient rather than high fructose corn syrup, but goodness gracious - sugar is your first ingredient Heinz?  It's overpowering.

Kraft Original:  This is another sauce that's typically stocked at your local grocery store. No description is featured on the bottle and the list of ingredients puts this sauce in the KC BBQ style of sauces, a thick, tomato based sauce that’s got some spice but is heavier on the sweet. Comparable to KC Masterpiece, that's not a good thing, it's a kid friendly sauce - heavy on the sweet.

Bullseye Everyday Original:  This is a Kraft Foods product with a slightly different list of ingredients and it's only slightly better than Kraft Original.  High Fructose Corn Syrup is the first ingredient listed and it is a sweet sauce in the KC BBQ style.  What separates it from Kraft Original is a higher measure of vinegar, which helps to offset the sweetness.  This used to be THE bbq sauce used by Burger King, but they dumped Bullseye in favor of Sweet Baby Rays.

Kingsford Original Smoked Hickory: I have to be honest here, going in I thought this was going to be another excessively hyped up "Name Brand" but over-the-top sweet sauce that would be more of a frosting than a BBQ sauce.  I was pleasantly surprised.  It wasn't too sweet at all and the hickory smoke notes definitely came through.  It is a thick sauce that lends itself to being a good glaze for the last 10 minutes of cooking time as opposed to a being a mopping sauce but that's OK, because the dirty little secret is truly great barbecue doesn't really need a sauce.

Cookies Original: Hailing from my home state of Iowa....  Yes, Iowa has some good BBQ.....  If you are a regular reader you know I really like Cookies Flavor Enhancer, my favorite off-the-shelf all purpose seasoning.  And I've been known to use Cookies BBQ sauce as a base for doctoring up with minced onion, bourbon, garlic powder, Cayenne, red pepper flake and a few other ingredients.  So in full disclosure I'm already familiar with this sauce.  It's a KC BBQ style sauce, rich and thick, not something you can mop ribs with but works really well as a glaze applied 10 minutes or so before serving.  What sets this sauce apart from others is the use of Worcestershire Sauce in the recipe.  A bit on the sweet side (which is why I like to doctor it, balancing it out with some heat), this is a versatile sauce, delivering classic BBQ flavor that will please just about everyone.

Weber Original: From the iconic maker of grills, comes Weber's Sweet & Thick Original BBQ Sauce.  You figure they know what they're doing right?  The recipe boasts of NO high fructose corn syrup and from the ingredients listed on the label this sauce is made in a Texas style, with more spice and less sugar than a KC BBQ style sauce.  And yes, Weber knows what they're doing, this is a very respectable sauce.  Smooth with a really nice finish, what sets Weber apart from other sauces is the use of red pepper, you definitely get that in each bite, it's not subtle, but it's not overpowering either.

Famous Dave's Sweet & Sassy:  If you know anything about BBQ, you know that Famous Dave's is renowned for winning on the competition BBQ circuit, touting more than 700 awards from a variety of contests nationwide, awards for Famous Dave's meats, desserts, his sauce, his catering business and his restaurants. So it comes as no surprise that this is a good sauce. It's a nicely balanced sauce hitting all the right notes, the tomato, the spice which is smartly offset by the sweet, you get the twang of the vinegar and here's what sets this sauce apart, the pineapple juice. It's a refreshing kiss of tart. There's a hint of honey in there too, making for a really nice saucy bite.

Sweet Baby Ray's:  There's no ingredient teaser description on the bottle, just a blurb about the sauce beating out 700 other competitors in a riboff leading to the creation of the company.    Enough said, the sauce lives up to the award hype. It's a very good all-around sauce, balanced in sweet, spice and twang, a morphing of KC and Texas style sauces.  It's an off-the-shelf bottle that deserves a place in your pantry or fridge.

The BEST - Head Country Original: This is a very well-balanced blend of sweet and savory with subtle spice and that's the description right from the bottle because it is that spot on. I'm thinking to myself, "Why haven't I tried this sauce before now?' This is competition bbq quality sauce, it is the sauce flavor judges are looking for when they sample contestant ribs, chicken and brisket. This was my favorite of the challenge, the clear winner and I'm speaking from experience having been a certified Kansas City Barbecue Society Competition Barbecue Judge.

So there you have it, a guide of sorts for the more popular 'base' or original bbq sauces that you will most likely find on your local grocery store shelves....  There are plenty more off-the-shelf sauces there, to include adventures into more elaborate flavor pairings.  Try them until you find one or two you really like.  I recommend having a bottle of something you like on hand in your pantry or fridge.  It's also good to have something store-bought on hand for those times when you're in the mood for creating a scratch-made sauce that's extra hot or has extra twang....  something that appeals to you, but maybe some family and/or a few friends.....  not so much...