Chapter 10 - Veggies are excellent prepared on the grill 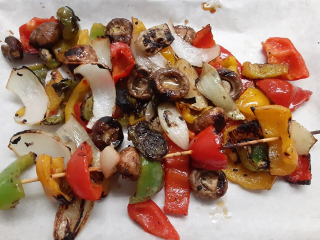 If you aren't really a big fan of veggies now, you will be once you start grilling them!  Adding veggies to your grilling menu really opens up a whole new world of flavors to your grilled fare.  Just about any vegetable can be done on a grill, simply dressed in olive oil, salt and pepper.  Serving on a skewer makes for a nice presentation.  And make no mistake, veggies taking on that hint of smokiness is WAY better than that stove-top boiled variety of green beans your mom might have made.....

Corn on the Cob 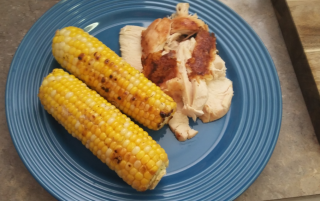 When  it comes to doing veggies on the grill, corn is king in my book.  I'm from Iowa, the Tall Corn state, so I'm a bit biased of course, but to me it's tough to beat a bite into some slightly caramelized, farm fresh corn on the cob prepared over hot coals, simply seasoned with salt, pepper and a kiss of garlic butter.  It's another dose of YUM!  If you can find a variety called, "Honey & Cream" at the Farmer's Market, GET SOME!   TIP:  When it comes to corn on the cob, fresh is key!  Prepare your corn on the cob the same day you buy it if possible.  The longer you let the corn sit in your fridge, the more those natural sugars of the corn turn to starch, which means, not nearly as good a bite!  Three days in the fridge and your corn turns into - eh..... 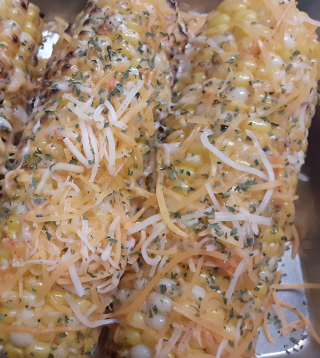 The secret to great grilled corn on the cob, is par-boiling it before putting it on the grill.  Par-boiling ensures the ears will cook evenly, the last thing you want are over-done AND under-done spots on an ear of corn!  Fill up a large pot about 3/4 full of water and bring to a boil.  Add the sugar and a pinch of salt.  Stir to dissolve the sugar.  Add the corn, cover, turn off the heat and let those ears cook for about 5-7 minutes.  While that corn is cooking, In a small grill-safe bowl, melt that butter, add the garlic powder, stir to incorporate over in-direct heat.  Remove the corn from the pot, pat the ears dry and place them on the grill over direct heat, brushing them with the garlic butter and hitting them with salt and pepper.  Rotate, brush and dash until desired level of caramelization is achieved.  Corn on the Cob is kind of like hot dogs, some people like just a few grill marks, some people like a little char. Serving Option:  Give it a little Mexican street corn flare with some Mexican blend shredded cheese, Mexican oregano and a kiss of lime juice, added just before plating.

Next to corn on the cob, asparagus is a favorite of mine, another veggie that is "Oh so delicious!" when done on the grill....  That tender-crisp bite, the hint of smoke, and of course....  the garlic butter! 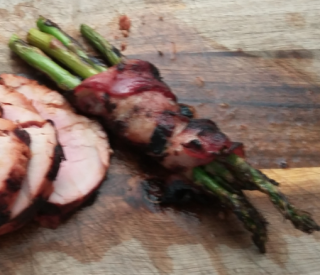 Toss the asparagus in the olive oil, salt and pepper, place on the grill over direct heat.  Grill for about 2-3 minutes, rotating the asparagus half-way through.  Now if you've been paying attention in reading other recipes, you already know to have a grill safe bowl of melted garlic butter sitting on the indirect heat side of the grill.  Brush the asparagus lightly with the garlic butter just before plating.

Serving Option:  Asparagus is also great paired with bacon!  Just take four sprigs of fresh asparagus, hit them with a brushing of melted garlic butter, then wrap them up with a slice of bacon.  Rotate over direct heat until the bacon is crisp.

Directions
In a medium-sized bowl, drizzle the veggies with the olive oil and seasoning salt, toss lightly. Using a veggie tray over the coals, grill the cauliflower, carrots and mushrooms until the cauliflower and carrots are tender crisp and just start to caramelize. It doesn't take long over high heat.   Remove the grilled veggies and toss with the bacon pieces and the BBQ sauce in a serving bowl. Salt and pepper to taste. Delicious!   Serving Option:  In a grill safe bowl over indirect heat, warm up the BBQ sauce and the bourbon, bringing it to a slow simmer, until it starts to bubble.  Do this in advance of grilling the veggies to let some of the alcohol cook out and NEVER pour alcohol into/onto anything over the hot coals!

I hate eggplant, except done this way, on the grill.

Directions:  This recipe makes use of the traditional, big, American eggplant, but you can use the Chinese variety, just slice it lengthwise.  After peeling and slicing, dress the eggplant in the olive oil, salt, pepper and Parmesan cheese on a cookie sheet.  Be careful with the salt, as the Parmesan has a salty element to it.  Place the eggplant over direct heat, about 2 minutes each side or until that golden brown color is achieved.  Hit the eggplant with a few dashes of Louisiana Hot Sauce just before plating.

Potatoes, a.k.a. 'taters, are excellent on the grill because they can really absorb that smoky flavor, which means - YUM!  I like to use Yukon Gold potatoes, the skin gets nice and crispy without drying out and the potato itself is almost creamy, with buttery notes.  Potatoes are a great presentation food as well, you can get some excellent grill marks on 'taters!  They are a veggie, right?....   :)

Directions:  Like corn, potatoes need to be par-boiled first before putting on the grill, you want to ensure even cooking, without drying out the outer parts of the potato.  Boil potatoes in water for about 4-5 minutes.  TIP:  Put the potatoes in a large pot, then fill with COLD water, then put the pot on the heat to bring to a boil.  This is how you get the even cooking.  Putting potatoes in hot, boiling water means done on the outside and raw on the inside potatoes.....  While the potatoes are boiling, combine butter and remaining ingredients in a grill safe bowl, place over indirect heat to melt.  Strain potatoes after boiling and slice.  Place potatoes over direct heat on the grill, brushing them with the melted butter mixture.  Grill about 3-4 minutes on each side.

Zucchini on its own is a very bland vegetable, but the nice thing is, it can readily take on additional flavors!  Enter, pepperoni.

Directions:  Dress the zucchini with the olive oil and Italian dressing.  Top each zucchini disk with a slice of pepperoni, secure with a water soaked toothpick.  Grill the zucchini, veggie side down over direct heat for about 3 minutes or until brown.  Do not flip!  Move the discs over to the lower heat side of the grill for another minute or so, to let those pepperoni oils absorb into the zucchini.  Serve immediately.

Sprouts and bacon are a classic combination and even better when prepared over hot coals!

Brussel sprouts are another veggie that needs to be par-boiled before placing on the grill.   Add the sugar and a dash of salt to a medium pan of boiling water, drop in the sprouts.  Boil for about 5 minutes, drain and set aside until cool enough to handle.  Wrap the brussel sprouts with bacon and put on metal skewers.  While the sprouts are cooling, you know what to do with the butter....  In a grill safe bowl, melt the butter, garlic powder and black pepper.  Place the skewers over direct heat, rotating frequently until the bacon is crisp on all sides.  Brush the sprouts with butter and sprinkle them with the Parmesan cheese before plating.

Place the mushrooms in a large Ziplock bag, set aside.  Mix the remaining ingredients together in a small bowl, pour over the mushrooms and marinade in the fridge for at least two hours.  When the coals are hot, place mushrooms over direct heat, gill side down, reserve the marinade for basting.  Grill for about 10 minutes, turning every two minutes and basting.  Despite the marinade, mushrooms can dry out, hence, the basting.  Serve immediately.  These are excellent served as a side, sliced up and enjoyed.  They're also fantastic served on a bun with lettuce and tomato like a burger.  They're also quite nice over a bed of pasta with some Parmesan.

In a medium bowl, mix all ingredients together ensuring carrots are well coated.  Heat up a veggie tray over direct heat, put on those carrots and grill, turning frequently until tender crisp, about 5-7 minutes.  Serve immediately.

Is there another veggie side that is served more with grilling fare than baked beans?  I don't think so.  Baked beans go with everything, pulled pork, chicken, burgers, you name it.

Directions:  You'll need a large cast iron skillet for this recipe.  Mix all ingredients together, grilling over indirect heat, lid down for at least one hour.  This is low and slow goodness folks, check every 15-20 minutes, stir, making sure the bottom of that skillet isn't too hot, you don't want a layer of charred beans, you may have to adjust your coals.  Serve family style.

Get your copy of Grilling Good Eats now available in paperback on Amazon! 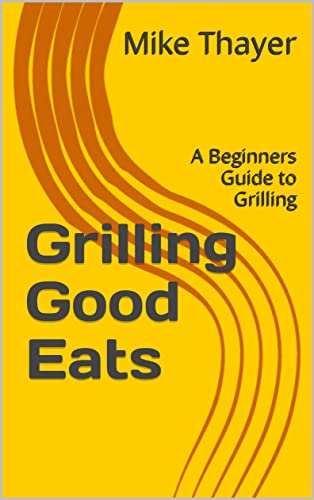