Beef Cuts and how to grill them

Becoming familiar with beef cuts, knowing where on the cow that steak or roast comes from and how butchers might label those cuts when packaging puts you on the path to becoming a Master Griller.  So too does knowing which cuts are tender and don't need much preparation before grilling and which cuts are tougher and need a marinade to soften them up.  Going beyond the basics in really knowing your beef helps you determine if you'll be grilling over direct heat for a good sear or grilling over indirect heat for low and slow deliciousness.

Let's start with "Chuck," a.k.a., beef shoulder.  From here you get cuts and package labeling like Chuck Roast, Arm Roast, Blade Roast, Chuck Steak, Blade Steak, Charcoal Steak and Flat Iron Steak*.  Chuck cuts are tougher cuts of meat (the shoulder muscles work hard) and for that reason are also less expensive than other cuts.  Chuck has great base flavor but needs a good marinade to help soften things up before grilling and these cuts do best over indirect heat, low and slow or in the case of the Flat Iron, a reverse sear (*starting off by grilling over indirect heat, then finishing the steak hot, over direct heat).  Don't over cook!  Grill to a nice medium-rare to medium.  Anything over medium starts to become rubbery, tougher to chew and you've essentially grilled out the flavor.  Nobody likes a chewy, dry piece of meat!  Oh, and scraps from this part of the animal are used to make Ground Chuck, now you know what part of the cow that comes from.  Ground Chuck is excellent for grilled cheeseburgers, better than regular ground beef - more flavor! 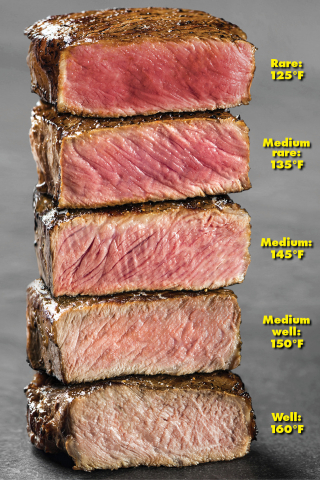 Rib cuts include meats and package labeling such as Standing Rib Roast (a.k.a. Prime Rib), Rolled Rib Roast (boneless and wrapped in butcher's twine) and my personal favorite, Rib Eye Steaks!  These are tender cuts and have a lot of marbling, a.k.a., FLAVOR.  Being tender and full of flavor, they're also more expensive.  In my humble opinion, these cuts do NOT need much doctoring help at all in prepping for the grill.  When I do Rib Eye steaks, it's just salt and pepper - let that meat sing!   Grill over direct heat to get that good sear and those great grill marks, then move to indirect heat to finish cooking to desired temp. And for the record, anything grilled to "Well Done" sucks, a waste of meat and money.

Plate cuts are actually the lower part of the ribs.  From here you get Short Ribs and Skirt Steak.  These are tougher cuts but they pack A LOT of flavor!  A good marinade softens them up but the grilling approach is different for each.  Go low and slow with the Ribs, away from the flame.  The Skirt Steak, which is actually the cow’s diaphragm muscle, can take the heat.  It's a thin cut, sear it on both sides over high heat, but it's GOT to have marinade or dry rub on it for at least four hours prior to grilling. Fun Fact:  Skirt Steak is most commonly used for fajitas.

From the Short Loin area you get some great steaks!  Bone-in Club Steak, New York Strip Steak (Boneless and fat trimmed), Kansas City Strip Steak (Bone attached with a thin strip of fat) and if the tenderloin is included in the butchering you get T-Bone and Porterhouse Steaks.  All these steaks are excellent on the grill.  I like to prepare these cuts by applying my favorite steak rub about 30-40 minutes before grilling.  T-Bone and Porterhouse grilling tip:  With these steaks you're getting two types of meat - a strip steak on one side of the bone (the bigger piece of meat) and tenderloin on the other (the smaller piece of meat and more tender).  Always keep the strip steak side of the T-Bone or Porterhouse pointed to the flame.  The tenderloin side cooks faster and doesn't need near as much direct heat.  A reverse sear preparation is best for these steaks.

The full Sirloin part of the cow runs from the 13th rib, back to the hip bone and is sub-divided into Top Sirloin and Bottom Sirloin sections.  From the Top Sirloin you get, you guessed it, Sirloin Steaks!  A nice steak, but a leaner steak and so it needs some fat help.  With a little olive oil, some salt and pepper or your favorite rub, Sirloin Steaks are excellent on the grill over direct heat.  The Tenderloin is where Filet Mignon comes from, the most tender cut of beef - the very pointy end of the Tenderloin.  Like the sirloin, it's a lean cut and needs some fat help, that's why you often see bacon wrapped around these beauties.  A reverse sear method of grilling is best.  Grill over indirect heat until about 10 degrees short of your desired heat and then sear it over direct heat and crisp up that bacon to finish.  Center Cut Roasts are also taken from the Tenderloin, the name speaks for itself and because they're so tender and lean they also come with a higher price.  To grill, it's low and slow, use a drip pan and baste to keep it from drying out.  You'll love that smokey roast flavor!  From the Bottom Sirloin you get Tri-Tip Roast, Ball Tip Roast, Tri-Tip Steak and Flap Steak.  These cuts are lean, a bit tougher, but SO versatile!  Any of them are great sliced into strips or cubed for Kabobs and married with a marinade before grilling over direct heat....  Well it's another dose of YUM!  Savings Tip:  Buy a roast from the Bottom Sirloin and cut your own steaks, or strips, or cubes...  By the pound, it's cheaper to do that than buying your steaks, or strips, or Kabobs already cut at the meat counter.

The full Round part of the cow is basically the back legs and rump area, which gets a lot of exercise - so we're talking lean but tougher cuts of meat and similar to the Sirloin area, the Round is broken down into subdivisions, the Top Round and the Bottom Round.  The key to remember about any cut from the Round is that this is the least flavorful part of the cow.  It's also why these are typically the least expensive cuts.  From the Top Round you get the Top Round Roast and Top Round Steaks, a.k.a. London Broil (not bad, but SO over-rated). Before you get to the Bottom Round - it's a center cut thing - you have what's called Eye of Round Roast and Eye of Round Steak - kind of like the 'eye' of the hurricane, get it?  And in the Bottom Round you have Rump Roast, Sirloin Tip Roasts, Sirloin Tip Steaks (it's a marketing thing, meat cut from where the Round section meets the Sirloin section, hence the use of "Tip," but know that it's not really Sirloin....  and Stew Beef.  These are all cuts of meat that MUST have a marinade or dry rub applied before grilling and do best in a low and slow preparation, OFF the flame over indirect heat.   Nothing in this group can be quickly prepared like a tender and melt-in-your-mouth Rib Eye.  Don't get me wrong, these cuts can provide for a great meal, but marinade overnight and prepare your coals for a slow cook.    The best thing about the Round is it's easy  on the wallet and when done right, delivers nicely on the taste of beef.

From the Flank you get Flank Steak and Ground Beef.  Flank Steak is delicious, but it is a tougher cut and most definitely needs a marinade to help break it down.  It's one of the most inexpensive cuts of beef, popular because of the price and also because it embraces a marinade so well.  Grill quickly over high, direct heat and cut against the grain into strips for serving.  Flank Steak is also excellent in a stir fry!

Saving for what in my opinion is the best for last, the last cut is all about the Brisket.  There's a reason this cut doesn't have a breakdown of roasts, steaks, strips or tips....   It's simply all about the Brisket, which is essentially the breast muscle, the chest of the cow.  It takes on a major muscle workload for the animal and therefore has a lot of connective tissue and collagen.  Yes, that means it's a very tough cut of meat but it also means it's PACKED with flavor!  The Brisket deserves a pedestal and why it is heralded at BBQ competitions around not only the U.S., but the globe.  It's popular prepared as corned beef and further spiced to make pastrami, but it's best known as THE meat for smoking, low and slow deliciousness.  It's so good, yours truly makes a dynamite chili with the leftovers (if there are any).  Back in the day, Brisket was an inexpensive piece of meat, a working man's purchase....  But once people started catching on to how much flavor a properly prepared Brisket has, well, now it's one of the more expensive cuts of beef.  Funny how that works....  This is a fibrous piece of meat that must have a marinade or dry rub working overnight.  And this ultimate piece of beef needs to be slow smoked for 8 - 12 hours, depending on the size of your brisket.  Sliced thin, it's heaven on a plate.

So in becoming familiar with beef cuts, know that price is most often driven by what's the most tender (the Tenderloin), what takes more butcher expertise to slice up (the Rib and Short Loin sections) and what's currently popular (Brisket).  If you're wanting to get the most bang for your buck without sacrificing on flavor, buy in bulk and go with roast cuts from the Sirloin section and doing your own butchering.  If you're looking for a crowd pleaser for a party that's easy on the wallet, think flat steaks, thin steaks that take to marinades and grill up quick, we're talking flat iron, skirt, flank and hanger steaks.  If you really want to stick to a budget but crave beef, then Round cuts are your friend.