Pork Cuts and how to grill them 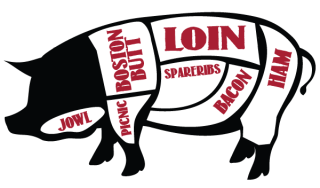 Pork is under-eaten and that’s a grill crime. Sure, ribs are popular, but there are so many other cuts of pork that a lot of folks just don’t consider but should. Ribs are fantastic, but so are pork roasts, chops, blade steaks, loin kabobs and more. They’re all so darn tasty!

Becoming familiar with pork cuts, their versatility and how butchers might label those cuts when packaging puts you on the path to becoming a Master Griller. So too does knowing which cuts can take direct heat and which ones are best grilled low and slow.

There are pork cuts for every occasion, from casual dining to formal gatherings.  Let's start with the Boston Butt cuts.  I know what you're thinking, that's not a very glamorous name and as you can see from the diagram, it's actually the pork shoulder, not the butt.  So why the heck is it called a butt?  In the colonial days of New England, butchers would take the less prized cuts of pork like hams and shoulders and pack them into barrels for storage and transport. The barrels they put them in were called butts. The shoulder cut became a Boston specialty and soon came to be known in all of colonial New England as the "Boston Butt."  The Boston Butt, a.k.a., Pork Butt, a.k.a., Pork Shoulder, is usually packaged at the meat counter as is using the aforementioned names in 4 - 10 pound packages and boneless.  If you've ever had pulled pork, you were eating pork shoulder.  This is an inexpensive cut but packs a lot of flavor and embraces dry rubs, sauces and marinades very well.  But because it has a lot of fat and marbling (flavor), it needs a low and slow preparation.  When grilling, go low and slow over indirect heat and we're talking hours of cooking time, approximately 2 hours per pound at 225 degrees.  It's even better in a smoker!  And while a 5 pound Boston Butt is perhaps the most popular cut from this section, you'll also 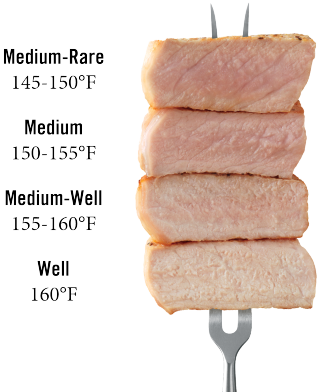 see Blade Steaks and bone in Shoulder Chops at your favorite meat counter.  Butchered off the shoulder blade and the fat trimmed, the steaks and chops can and should be grilled over direct heat.  These are generally cut on the thinner side and by the time you get those great diamond shaped grill marks on both sides, your pork is perfectly grilled to a nice medium rare, 145 degrees, the minimum safe temperature for pork.  Less common at the meat counter but also very delicious is Cottage Bacon, which is pork shoulder that is boned out, the cap of fat taken off, cured, pressed, and sliced thin.  It has a unique ham/bacon flavor profile and grilled Cottage Bacon sandwiches rock!  Just a minute or two on each side over direct heat is all it takes.

Behind the shoulder is the pork Loin which is the leanest and most tender part of the pig.  This is where the versatility of pork really shines.  Babyback Ribs (taken from the top of the rib cage along the backbone), Country Style Ribs (boneless strips of pork loin), Pork Rib Roast (a.k.a. Rack of Pork), Canadian Style Bacon, Loin Chops and Loin Roasts are cut from this area and in this section you'll find what BBQ competitors refer to as the "Money Meat," the Tenderloin.  Loin roast is sometimes confused with the tenderloin but the similarity is in name - loin - only.  The term 'roast' simply refers to a large cut of pork that is sold in pieces typically weighing between two and 10 pounds.  The Tenderloin is a smaller, long cut that usually weighs about a pound and when properly prepared is in my humble opinion THE most delicious cut of pork, tender indeed, it's aptly named and why you'll pay a bit more for it.  You'll often see these at the meat counter pre-packaged in a marinade.  Loin Roasts, while not as tender as the Tenderloin, are more economical but also very delicious when brined or dry rubbed and grilled over indirect heat.  Here's the versatility part, the boneless pork loin..... You can treat it like a roast, cut it into chops, slice it thin for grilled sandwiches or chunk it up for kabobs. It’s cheap, delicious and a bonus is its flavor diversity. It absorbs marinades/sauces well and works great with just about any chicken recipe. Try using pork loin instead of that chicken breast in your favorite chicken recipe, you’ll like it!  Just don't over-cook pork loin cuts, they tend to dry out quickly.  The Pork Rib Roast can be a real show stopper and a Pork Crown Roast, where the Rack of Pork is turned into a circle and tied is perfect for an elegant setting.

Ham is the polite reference to the hind legs and yes, butt of a pig.  Hams can be wet-cured, dry-cured, spiraled and/or smoked.  There's bone-in hams and boneless hams, they come fully-cooked, partially cooked, uncooked and even boiled.  A Whole Ham includes both the butt and shank cuts of the leg and can weigh 10 to 20 pounds.  If you don't want a Whole Ham and that much meat, you have a few options.  A Butt End Ham is the upper cut of the hog's hind leg and a Shank End Ham is the lower cut of the hog's hind leg.  There's also the Center Ham Slice, a.k.a. the Ham Steak.  The Butt End has more meat but is also fattier and tougher to carve than the Shank End.  Some consider the Shank End portion to have a sweeter flavor.  When it comes to grilling, I go with the fully cooked varieties.  With fully cooked hams, there are no temperature concerns and all I have to worry about is enhancing some already incredible flavor that a good ham provides.  Ham Steaks, a little olive oil and your favorite dry rub turn out great grilled over direct heat, getting those great grill marks, about 2 - 3 minutes per side.  For Whole or End Cut hams, the low and slow approach is the way to go.  This is where you can really doctor the flavor profile up with citrus juice, apple juice, brown sugar, cloves or whatever else trips your trigger.  Cooking time is about 15 - 20 minutes per pound at about 250 degrees. Basting or spraying your ham is a must, they can dry out otherwise and if you are going to glaze or sugar your ham, wait until the last 30 minutes of cooking time to do so.  Sugar and/or glazes tend to get bitter if applied too soon.

Bacon isn't just for breakfast anymore and who DOESN'T love bacon?  The Bacon we all know and love comes from the belly of the pig, to be specific, Bacon is simply the name for cured, salted or smoked pork belly that is then sliced or cut in a slab.  Everything is better with bacon and just about any entree dish out there has some kind of version with bacon in it.  Grilled bacon is awesome, enhancing that smoky flavor.  You can't walk away when grilling it though or you'll get high flames and burnt bacon.  Start out grilling your bacon over indirect heat dressing it with some fresh ground black pepper, then put it over the flames to crisp it up just before serving.  Pork Belly itself is becoming more popular these days in its fresh form.  When grilling, it's a low and slow cook over indirect heat with a 1.5 pound pork belly taking about an hour to become Grilled Good Eats!  This cut takes on Asian flavors quite nicely!

Spareribs come from the upper belly of the hog and are known for their delicious, bold pork flavor.  These ribs are larger and heavier than Babybacks and they have better flavor because they have a higher fat content.  When Spareribs are cut and squared up with the sternum bone, cartilage and rib tips removed creating a nice, rectangular-shaped rack, they turn into St. Louis Style Ribs, the preferred ribs for competitive BBQ on the Kansas City Barbecue Society Circuit.  Ribs deserve a low and slow preparation and it's all about the dry rub.  You can find an excellent dry rub off the shelf to your liking at your local grocery store, but know that doing ribs right is an art form and can take years of practice to perfect, getting the rub, spritz, cook time and sauce just right.  Talk about having fun trying!

You'll see pork products from the Picnic section of the pig labeled as Arm Roast, Picnic Shoulder Roast, Arm Steak or Picnic Ham (which isn't really a ham, it's a roast).  Cuts from this section are less expensive than Butt cuts, they're a bit tougher and not as well marbled, but can be used interchangeably in many recipes calling for pork roast and BBQ.  Roasts from this area require low and slow grilling and are better served sliced than they are pulled or shredded.   This section of the pig is also often used in the making of ground pork.

The pork Jowl, a.k.a., cheek meat is delicious, but unless you live in the south, it's not readily available and marketed in other areas of the country.  Most people that know and understand Jowl meat fry it up like bacon.  Ask your local mom & pop butcher if he'll package some up for you.  Treating it like bacon, it's excellent on the grill, starting off low and slow over indirect heat and finishing hot over the flames to crisp up the edges.

So in becoming familiar with pork cuts, know that pork is an excellent and easier-on-the-wallet alternative to the high price of beef and the bonus is you can use pork in almost any kind of chicken dish.   The price for pork is most often driven by what's the most lean and tender, the loin section cuts overall being the most expensive and then there's what's currently popular, especially around the holidays, like a Christmas ham.  If you're wanting to get the most bang for your buck, go with boneless pork loin and do your own butchering.  If you're looking for a crowd pleaser for a party that won't break the bank, go with a Pork Crown Roast.  If you really want to stick to a budget but crave pork, then Picnic cuts are your friend.