Lamb Cuts and how to grill them 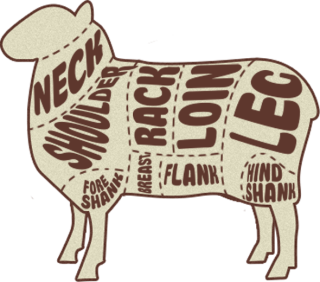 If you've never had lamb before, it's a MUST try! Lamb is the go-to meat in much of the Mediterranean. It's used there like beef is here in the states to make sandwiches, casseroles, entrees and sides. It's enjoyed as roasts, chops and you've probably heard of a 'Rack of Lamb' which is delicious! The meat presents a whole different flavor profile and it's outstanding! So if you're looking for something a little different to try, lamb is the ticket, no mint jelly required!

Becoming familiar with lamb cuts, their versatility and how butchers might label those cuts when packaging puts you on the path to becoming a Master Griller. So too does knowing which cuts can take direct heat and which ones are best grilled low and slow.

Let's start with cuts from the Neck which are inexpensive, but not really marketed and packaged as Neck meat by most butchers.  Neck meat is typically used to make Ground Lamb and Stew Meat, but if you've got a good relationship with your butcher, ask him to cut you some Neck Filets.  Meat from the Neck is a bit tough, so when grilling use the reverse sear method, low and slow on indirect heat until tender, then finish the Filets over direct heat to achieve those grill marks, pull the Filets when they hit the 135 degree mark and let them rest.  The Filets will continue to cook when resting and should peak a few more degrees to a perfect medium rare.

Shoulder cuts are an economical choice, as the meat here is a bit tougher, but still quite delicious!  Butchers will package and label cuts such as Shoulder Roast (bone-in), Rolled Shoulder Roast (boneless), Ground Lamb, Stew Meat and Shoulder Chops (also called blade or arm chops).  From the bone-in Shoulder Roast you can get a great meal of Pulled Lamb, rubbed with Rosemary, garlic, onion powder, salt, pepper and olive oil, then grilled low and slow over indirect heat until that meat falls away from the bone, about 4-5 hours depending on the weight of the roast.  Served on warm pita or flat bread, it's Another Dose of YUM!  Prepared with the same style of rub and a little white wine, the Shoulder Chops can be done over direct heat, searing them for those great grill marks then finishing them over indirect heat until that internal temp hits 135 degrees.

Meat from the Rack section of the animal are typically the most expensive, and that's because they are incredibly delicious and tender.  Rib Chops or Rib Cutlets are popular ways you'll see Rack cuts packaged but the most iconic is the Rack of Lamb, which is 8 chops together, uncut, about two pounds of meat.  You'll often see this packaged with a French Cut, where a few inches of meat is removed from the end of the bones which makes for more elegant, restaurant quality presentation.  All these cuts are excellent on the grill.  Single chops should be grilled over direct heat, seared to get those great grill marks, then finished over indirect heat until you reach your desired doneness.  A Rack should be done over indirect heat, roasting for about 30 minutes, then transferring over to the hot side of the grill, keeping the Rack over the flame just long enough to caramelize the outside edge of the meat on both sides.

One of the most readily available cuts from the Loin are Loin Chops, also known as T-Bone Chops.  These are tender, delicious 3 - 4 ounce chops with an attractive "T" shaped bone that runs through the meat. Season with your favorite dry rub, or marinate 4 to 6 hours, then grill over direct heat to desired temp.  I almost always go for the chops, they are simple to prepare and simply delicious!  Other Loin cuts you'll see at the meat counter are the Loin Roast and cubes for Kabobs.  KABOB TIP #1: Always put your meat and veggies for kabobs on separate skewers. A meat and veggie skewer combo looks great in the meat counter display case at the grocery store, but the fact is the veggies on the skewer cook through much faster than the meat. You want tender crisp veggies with a hint of charcoal flavor, not dried out, charred veggies to go with that lamb. KABOB TIP #2: Don’t overload the meat on the skewers, leave some space between the cubes. Meat that is packed too tightly won’t cook evenly, won’t look as nice when served and most importantly, won’t taste as good. Place your meat kabobs over hot coals to get a good sear, lid off. Turn a quarter turn after about two minutes, repeat through four rotations giving you a medium rare kabob. Place your veggie kabobs on the grill after the meat kabobs are cooked halfway through. Serve together with rice pilaf and warm pita bread.  It's another dose of YUM!

A bone-in Leg of Lamb makes for an impressive presentation, a cut that's perfect for any holiday celebration or entertaining a big group.  A boneless leg, a.k.a. a BRT, or Boneless Rolled, is one the most versatile cuts of lamb and perhaps the leanest because it's a hard working muscle.   With leg cuts you can grill them whole bone-in or boneless, you can trim some to make kabob meat, divide into individual chops or make smaller roasts.  Chops, smaller boneless roasts and steaks from this cut are typically packaged with labeling such as Sirloin Chops, Sirloin Roast, Rump Roast, Center Leg Roast, or Leg Steak, a.k.a. Lamb Steak.  These are more value-oriented cuts than the prized rib and loin chops and roasts but can be just as delicious with proper preparation.  A whole boneless Leg of Lamb typically weighs 7-8 pounds so there will be plenty of ways you can enjoy this cut and as you've figured out by now, the larger cuts like roasts need to be grilled low and slow over indirect heat, while chops, steaks and kabobs can be seared over the flame for that great sear.

Lamb Shanks come in both Foreshanks and Hindshanks but aren't exactly grill friendly.   Don't get me wrong, they're absolutely delicious cuts and the meat practically melts off the bone when they are slow cooked, but that's very tough to do on the dry heat of the grill.  A value cut, shanks are big on flavor but do best simmering in a broth.  Break out the cast iron pot and make a stew.

From the Breast section you get one of the most inexpensive cuts of lamb, Lamb Spareribs, a.k.a., Denver Ribs which are perfect for grilling and rival baby back pork ribs dressed in your favorite BBQ rub or sauce.  Meat from this area of the animal is also used to make Ground Lamb.

Meat from the Flank can be tough and is typically made into Ground Lamb.  Hello Lamburgers!  Try the following recipes, The Mediterranean Burger and Gyro Sliders!

So in becoming familiar with lamb cuts, Shoulder cuts are the most economical choice for the grill, you can't go wrong with Loin Chops for any meal and cuts from the Rack and Leg will be crowd pleasers.   If you haven't tried lamb before, you're missing out!  Go pick up a package of chops and grill yourself up a nice meal.  You'll be saying, "I wish I would have bought more lamb!" with the first bite.